All Our Shimmering Skies - The Borough Press Skip to main content 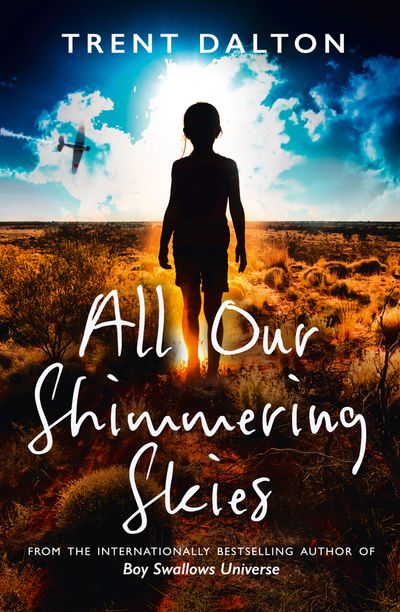 All Our Shimmering Skies

‘The most extraordinary writer – a rare talent’ NIKKI GEMMELL

Motherless Molly Hook, the gravedigger’s daughter, turns to the road, seeking the deep-country sorcerer who put a curse on her family.

By her side are the most unlikely travelling companions: Greta, a razor-tongued actress, and Yukio, a fallen Japanese fighter pilot.

As they journey from the vine forests to Australia’s wild and magical monsoon lands, they will encounter grave danger and discover true love…

Immerse yourself in a love letter to Australia from its best-loved writer.

Author: Trent Dalton
Format: Hardback
Release Date: 13/05/2021
Pages: 464
ISBN: 978-0-00-843837-1
Trent Dalton is a staff writer for The Weekend Australian Magazine and a former assistant editor of The Courier-Mail. He’s a two-time winner of a Walkley Award for Excellence in Journalism, a three-time winner of a Kennedy Award for Excellence in NSW Journalism and a four-time winner of the national News Awards Feature Journalist of the Year. His first book, Boy Swallows Universe was an international bestseller.

All Our Shimmering Skies

‘The most extraordinary writer – a rare talent' NIKKI GEMMELL