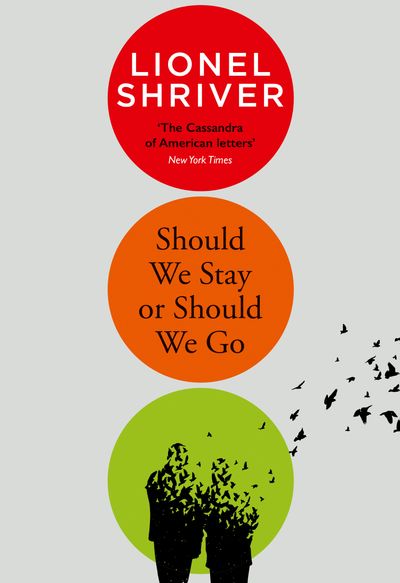 Should We Stay or Should We Go

When her father dies, Kay Wilkinson can’t cry. Over ten years, Alzheimer’s had steadily eroded this erudite man. Surely one’s own father passing should never come as such a relief?

Both healthy and vital medical professionals in their early fifties, Kay and her husband Cyril have seen too many of their elderly NHS patients in similar states of decay. Determined to die with dignity, Cyril makes a modest proposal: they should agree to commit suicide together once they’ve both turned eighty. When their deal is sealed in 1991, the spouses are blithely looking forward to another three decades together.

But then they turn eighty.

By turns hilarious and touching, playful and grave, Should We Stay or Should We Go portrays twelve parallel universes, each exploring a possible future for Kay and Cyril, from a purgatorial Cuckoo’s-Nest-style retirement home to the discovery of a cure for ageing, from cryogenic preservation to the unexpected pleasures of dementia.

Weaving in a host of contemporary issues – Brexit, mass migration, the coronavirus –  Lionel Shriver has pulled off a rollicking page-turner in which we never have to mourn deceased characters, because they’ll be alive and kicking in the very next chapter.

Author: Lionel Shriver
Format: Paperback
Release Date: 10/06/2021
Pages: 400
ISBN: 978-0-00-845856-0
LIONEL SHRIVER’S novels include the National Book Award finalist So Much for That, the New York Times bestseller The Post-Birthday World, and the international bestseller We Need to Talk About Kevin. Her journalism has appeared in the Guardian and the New York Times, the Wall Street Journal and many other publications. She lives in London and Brooklyn, New York.

Should We Stay or Should We Go